What community initiative can bring talented architects, engineers, contractors, and students together and help the Food Pantries of the Capital District? Why, CANstruction of course! And how can accountants and associates at TBC, (self admittedly with little design skills!) help CANstruction? By organizing an office-wide food drive to provide building materials! 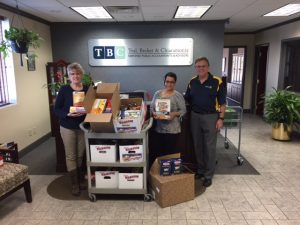 CANstruction is an annual exhibit and design competition that connects talented builders and students to create structures built completely out of canned food items.

After Going Red for the American Heart Association, TBC employees focused their February fundraising efforts towards collecting canned goods for Food Pantries for the Capital District in conjunction with their CANstruction event. TBC, who has been asked to donate items to help the Rotary Clubs of the Capital Region team for two years now, donated six boxes of food items that will be used for the team’s CANstruction creation (as shown in the photo). Kirk Pogge, President and CEO of Grassland Equipment & Irrigation Corp. and Rotary Club member told TBC that they collected 2298 pounds of food and $450 this year for the initiative.

Now that the Rotary Club has picked up our food items, they will spend the next few weeks implementing their design at the NYS Museum to help raise awareness of food insecurity in the Capital Region. These structures will be on display on the 4th floor of the museum from March 8-22. After the exhibit has ended, every can is donated to the Food Pantries for the Capital District to help feed families in the Capital Region.

The Rotary Club is one of 16 teams participating. Outside of the food drive, TBC’s shareholders also contributed a financial contribution to another business associate’s team. While every team is surely invested in the cause, the top three teams are honored at the Capital Region CANstruction Awards event.