Have you driven by TBC at night this month and wondered why the building now has a red light illuminating on it? We’re glad you asked, and if you didn’t notice yet, we will tell you why anyways. 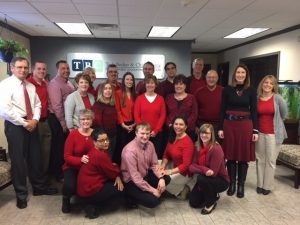 Each year in February, TBC employees “Go Red” on National Wear Red Day to raise funds and awareness about women’s heart health. This year, TBC accepted the challenge to “glow” red by using red lights at night to show others our support of American Heart Month.

“We decided we should do more than just educate our staff internally on the cruel facts that heart disease claims the lives of nearly 500,000 women each year,” said Gail Watson, an administrative manager who heads up the Go Red campaign at TBC each year.

As in year’s past, employees wore red to participate in National Wear Read Day on February 3, 2017. With a donation to American Heart Association (AHA), employees received a special wrist band or pin and the opportunity to dress casually in their favorite red attire. The employee donations collected came to $600 total.

“All across the Capital Region, businesses are literally ‘shining a light’ on heart disease in women by illuminating their buildings red,” said John Guastella, executive director of the Capital Region’s American Heart Association. “These lights serve as a tangible reminder that although heart disease is the number 1 killer of women in America, it is also 80 percent preventable. We know that women will see these lights and take action during February, American Heart Month.”

“It’s important that we post messages throughout the office and send email messages to employees to communicate the risk factors for heart disease. Before getting involved with the campaign, many of us did not know the warning signs for a heart attack or stroke, or know the difference between cardiac arrest and a heart attack,” Watson said. “It’s a great way to educate ourselves and now even more people may be aware through the red light.”